Confused flour beetles are very common pests infesting many flour mills, warehouses, and grocery stores. They also feed upon grain, beans, dried fruits, nuts, chocolate, and other foods in the house. Flour beetles attack milled grain products such as flour and cereals. These beetles often hitchhike into the house in infested flour and can build up into large populations on food accumulations in cabinet cracks and crevices and in furniture.

The adult female may live for as long as two years, depositing 300 to 400 eggs. The mature larva is brownish-white, has six legs, and is up to 13mm long. The life cycle requires one to four months when temperatures are favorable.To eliminate these pantry pests, go to our Pantry Pest site, where you will find mechanical and chemical methods for controlling all pests of stored products. 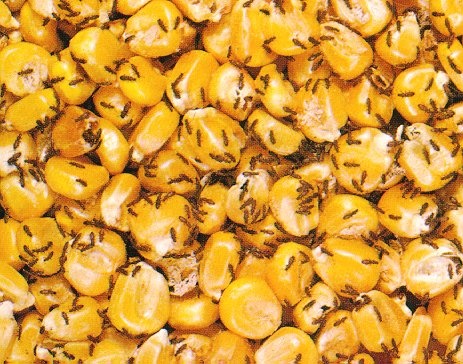 The control of any stored product pest involves many steps, primary of which is discovery of infested food items or other sources of infestation (e.g., food spillage accumulation). All dried food products need to be inspected for signs of infestation, including cereals, packaged dried foods (e.g., food bars and chocolate) and pet foods. Keep in mind that infested items may not always be stored in the kitchen. Products made of or containing vegetative materials may be stored in any room of a house. Infestations have also been traced to old rodent baits placed in attics, wall voids and similar out-of-the way locations. A pest management professional can be helpful in finding difficult infestation sources.

When crushed to a fine powder it feels similar to chalk powder to the touch, but when viewed under a microscope the fine particles resemble shards of broken glass.Treatment against Bedbugs, ants, cockroaches, silverfish.