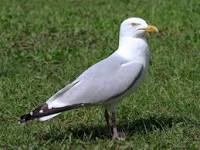 While herring gull numbers appear to have been harmed in recent years, possibly by fish population declines and competition, they have proved able to survive in human-adapted areas and can often be seen in towns acting as scavengers.

Juvenile and first-winter birds are mainly brown with darker streaks and have a dark bill and eyes. Second-winter birds have a whiter head and underparts with less streaking and the back is grey. Third-winter individuals are similar to adults but retain some of the features of immature birds such as brown feathers in the wings and dark markings on the bill. The European herring gull attains adult plumage and reaches sexual maturity at an average age of four years. 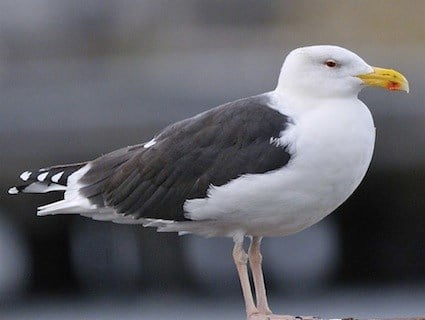 They are smaller than the herring gull. The taxonomy of the herring gull / lesser black-backed gull complex is very complicated; different authorities recognise between two and eight species. This group has a ring distribution around the northern hemisphere. Differences between adjacent forms in this ring are fairly small, but by the time the circuit is completed, the end members, herring gull and lesser black-backed gull, are clearly different species. The lesser black-backed gull measures 51–64 cm (20–25 in), 124–150 cm (49–59 in) across the wings and weighs 452–1,100 g (0.996–2.425 lb), with the nominate race averaging slightly smaller than the other two subspecies. Males, at average weight of 824 g (1.817 lb), are slightly larger than females, at an average of 708 g (1.561 lb). Among standard measurements, the wing chord is 38.3 to 45 cm (15.1 to 17.7 in), the bill is 4.2 to 5.8 cm (1.7 to 2.3 in) and the tarsus is 5.2 to 6.9 cm (2.0 to 2.7 in). A confusable species is the great black-backed gull. The lesser is a much smaller bird, with slimmer build, yellow rather than pinkish legs, and smaller white "mirrors" at the wing tips. The adults have black or dark grey wings (depending on race) and back. The bill is yellow with a red spot which young peck at, inducing feeding (see fixed action pattern). The head is greyer in winter, unlike great black-backed. Annual moult for adults begins between May and August and is not complete on some birds until November. Partial pre-breeding moult between January and April

The call is a "laughing" cry like that of the herring gull (to which this species is closely related), but with a markedly deeper pitch.

CALL US FOR FURTHER INFORMATION