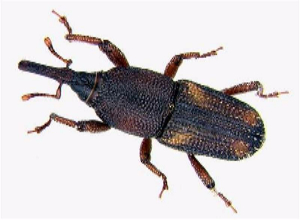 A complex of weevils, the rice ( Sitophilus oryza ), granary ( Sitophilus granarius ), and maize ( Sitophilus zeamais ) weevils, are among the most destructive pests of grains, seeds, and grain products stored in elevators and bins. The adult granary weevil is a somewhat cylindrical beetle about two-tenths of an inch (two to three mm) long. The head is prolonged with a distinct snout extending downward from the head for a distance of about one-fourth the length of the body. The weevil is polished red brown to black with ridged wing-covers and a well-marked thorax with oval pits. Unlike the rice and maize weevils, the granery weevil cannot fly. The egg hatches in a few days into a soft, white, legless, fleshy grub which feeds on the interior of the grain kernel. The grub changes to a naked white pupa and later emerges as an adult beetle. Adult granary weevil live an average of about seven to eight weeks. Each female lays 50 to 200 white eggs during this period. The female uses her strong mandibles to chew a small hole in the grain kernel, where she deposits a single egg in the hole and seals it with a gelatinous fluid. In warm weather, the granary weevil can develop from egg to adult in about five weeks. Cold weather prolongs development. The granary weevil cannot fly and so is most likely to be found where grain is stored, and moves with infested grain. These weevils are very destructive grain pests. Of the three, the rice weevil is probably the most insidious, owing largely to the ability of flight. All three weevils develop as larvae within the grain kernels. They frequently cause almost complete destruction of grain in elevators or bins, where conditions are favorable and the grain is undisturbed for some length of time. Infested grain will usually be found heating at the surface, and it may be damp, sometimes to such an extent that sprouting occurs. Wheat, corn, macaroni, oats, barley, sorghum, Kaffir seed, and buckwheat are just some of the grains and products on which these weevils feed.