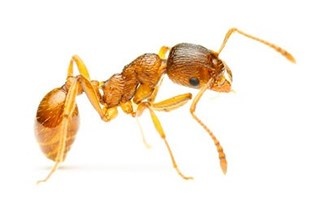 Pharaoh ants are small, yellow ants about 1/16-inch long.   They have two nodes and the workers are all one size.  It is often confused with the thief ant which is also a small, yellow ant with two nodes.  The Pharaoh ant's antenna has 12 segments and ends in a three-segmented club.  the thief ant's antenna has only 10 segments and a two-segmented club.

The Pharaoh ant can be found throughout the UK but is most common in the southern states.  In northern states, it is most commonly found in apartments and commercial buildings such as hotels and hospitals.  In the South, this ant is a common pest in homes as well as other buildings.  In temperate climates such as the UK, the Pharaoh ant cannot survive outdoors year-round and so is found in close association with heated buildings.  It can survive outside only in the subtropical areas.

Pharaoh ants do not build mounds or carve out galleries in wood.   The nest in any dark void in a structure.  Nest locations include wall voids, cabinet voids, behind baseboards and window moldings, behind insulation of appliances, inside hollow curtain and shower rods, boxes and expansion joints in slabs.  They may even be found in areas such as folded paper sacks and newspapers.  Outside, these ants can be found in leaf litter, flower pots and in the debris of rain gutters.

Control of these tiny ants will require specialist help.

On many occasions several visits or more may be required to eradicate Pharaohs Ants.

We do not recommend you attempt DIY treatment.

This can potentially cause the problem to spiral out of control.